I don’t want to see the POTUS fail, yet in all honesty I am having difficulty with compassion considering there isn’t any compassion being displayed from him, his Fright Night cabinet or Congress. Some people aren’t aware of such behavior so they may not be able to see it, instead thinking that this is just for show. Some people are in denial and make excuses for his behavior, and still others are ‘comfortable’ with narcissistic behavior and don’t care.  But, anyone that has been in any kind of relationship or familiarity with a narcissist/sociopath knows that it never gets better.  It’s been less than 2 weeks and already it looks like a Comedy of Errors, only it’s not funny.  I wouldn’t be surprised if POTUS, his cabinet and Congress sought ways to limit the free press, access to it or instill the slow decimation of our constitutional rights. Watch, it will happen. For the people who think you’re safe, you’re not.  A narcissist/sociopath will turn on you and discard you just as soon as you are no longer needed for his plans.

Here’s what you can look froward to being in a personal relationship with a Narcissist/Sociopath. Red lettering are broad examples via the current POTUS.

In the beginning of the relationship (Campaign) you can look forward to:

In the middle of the relationship (now) you can look forward to:

Near the ‘end’ of the relationship you can look forward to: 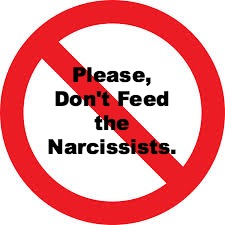 So, How do you deal with a narcissist/sociopath?  There are only few options.

A relationship with a narcissist/sociopath will deplete you emotionally, physically and possibly financially because they will slowly and methodically tear you down by criticizing  everything you do, everything you are until you yourself begin to feel hated and resemble just a shell of what you were.

*Note: For the national scale, what will be needed is consistent and firm boundaries (Marches/Protests) by the people of this nation.

If you choose to leave the relationship (set a boundary) before your narcissist/sociopath partner wants:

How do you know when you’re dealing with a Narcissist/Sociopath?

Some people think that a narcissist can change.  There can be change with consistent long-term therapy.  However, I would say the change that will be seen will be fairly small. A baby takes bigger steps.  Without the empathy muscle, change is minimal.  I know I sound harsh maybe even gloomy, but this is reality when you’re dealing with a personality disorder and times2.   For the people refusing to see that this behavior is not ok because you think you’re safe, well, you’re not.  It NEVER gets better with a narcissist/sociopath.  It may appear so in the beginning, but underneath the smoke and mirrors is the truth.