Hey all, I’m not sure about you but I’ve been addicted to Billions, the show on Showtime with Damian Lewis and Paul Giamatti?  This is a show about two bulls locked in a battle with U.S Attorney, Chuck Rhodes played by Giamatti attempting to put Wall Street billionaire Bobby Axelrod, played by Lewis away (somehow) for securities fraud.   I thought Billions was going to be a scripted tv-show based on displaying the ‘gluttony’ of the wealthy 1%, but with my two favorite actors, it is so SO much more.  It is about wealth, class, inequality, politics, the intricate and convoluted weaving between politics and Wall Street, who has power over whom and the psychology of it all.  It really could be a character or psychological study of our financial and political times of today.  And I F-ing love it!

This was me the other night watching the prelude to the season 2 finale :

I was on pins and needles during Sunday night’s episode, with the many twists and turns like a cloak and dagger mystery. And as usual, I look through the lens of psychology when looking at some tv-shows and this one is so brilliant, that it keeps me guessing about the characters’ psychology/sociopathy scale. It’s no secret that the Wall Street, Political, Law, Business, Marketing/Media industries and high-level individuals have a propensity to score higher than average on the narcissism, sociopath index scales (Hare, R. Without Conscience: The Disturbing World of the Psychopaths Among Us, 1999;  Konnikova, M. The Confidence Game, 2016).  Besides the current real-life administration, Billions provides a glimpse into the psychology.

Again, there are many elements that Billions addresses but I’m most interested in the psychology of various characters, especially the main characters. Both men are…complex, like all of us.  Life is complicated and so are you.

Bobby Axelrod (Damian Lewis) head of Axe Capital has acquired his billions through gut instinct, knowledge, bribery and some other not so nice behavior.  He wants to win, to be the top dog.  Winning and acquiring (money, companies) are his thing.  He makes the plays, the decisions and manipulates the world financial market in his favor.  Needless to say, making these decisions while increasing his coffers, will destitute the many others that have no face and he doesn’t lose sleep over it.  Limitations are meant to be crossed.  Bobby also has a henchman that finds other people’s weakness’ or soft spots to exploit or threaten them to his favor when needed.  Yet, Axelrod has been faithfully monogamous to his wife of 15 years with telling one lie in those 15 years. Despite being able to buy just about anything and anyone, Axelrod isn’t out with other women, escorts, strippers and the like until the wee hours of the morning nor does he lie to his wife.  So, by all accounts, he is loyal, monogamous, doesn’t use substances and is honest (direct) with his wife.  The relationship seems to be his rock, his stability despite his love for making money and besting others, but does he love his wife or does he see her as a possession or his property?  What’s interesting about this, is that a narcissist, sociopath will mistreat and abuse his/her spouse yet they are dependent upon them, so when the spouse has had enough and wants to leave, the narcissistic/sociopath will become unglued and attempt to ‘destroy’ their partner any way they can.

Verdict so far:  He has some deficiencies and may exhibit characteristics but Bobby Axelrod isn’t a full-blown sociopath.   What gives it away is: Although he compartmentalizes his behavior, he isn’t reckless with his relationship, he doesn’t lie or cheat on his wife nor does he engage in substances.  You see his entitlement through what he can purchase, but that entitlement hasn’t carried over to his marriage-yet. Personally, I’ve been waiting for how Axelrod will let off some steam in his personal life because he is very well-controlled and well-controlled people can’t do that for too long before some (possibly deviant) behavior arises.  It’s like a politician that looks squeaky clean on the outside proclaiming the importance of family values (monogamy and anti-gay) but finds himself trolling for men in a public bathroom or a politician who made it his goal to clean up the prostitution industry in his city only to procure the services of an escort on a regular basis. 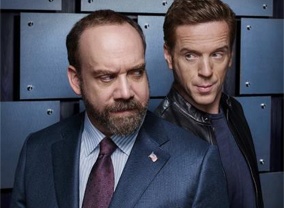 Which brings us to Chuck Rhodes, another complex character.  Giamatti’s character is a U.S. Attorney fighting for justice for the underdog with political ambitions in season 2.   He’s the highest of the law in his jurisdiction, so what kind of pressure do you think he’s under on a daily basis?  Well, to let off some steam, Rhodes enjoys S&M Bondage with him submitting, taking orders and being ‘punished’ with pain – by his wife. That was their agreement, otherwise if news got out, it would cost him his position.   Having worked with and heard many, many things as a counselor which no longer draws a surprise, this was a brilliant characterization by the Billions writers and pretty spot on.  I can understand it, psychologically.  High pressure, high level jobs and having to perform (profits) as well as having multiple professional and personal responsibilities on your shoulders, and the power or wealth that comes with the position wields a lot of stress for one individual and can be exhausting.  It’s no wonder that he would enjoy being dominated and told what to do.  What a breather that must be for him to submit to the will of another albeit momentarily.   Psychologically speaking on this subject, the backstory can go anywhere.

On to sociopathy for Rhodes.  Rhodes set Bobby up at the literal financial expense of losing his Trust (worth millions), his father placing all of his liquidity (is that a word?) as well as Rhodes’ friend, Ira selling his shares back to his law firm and just about quit his job.  Should I put friend in quotes? Probably.  Rhodes knew what he was doing.  He served his father and his friend up like a platter of sashimi for his own needs, to ruin Axelrod.  Rhodes knew or at least hoped that Axelrod would do something to make the stock plummet.  This is where Axelrod’s bribing comes in. He bribed a chemist for vials of a bio-hazardous material that would leave the recipient with stomach issues for a week, kind of like Chipotle.  Axelrod also paid people to ingest this hazardous material while drinking the Ice Juice.  Come to find out, Rhodes was the brainchild of this sting.  In addition to flanking his father and his friend, Rhodes seemed to use his wife’s position as Axelrod’s company therapist to gain information.   After Wendy, Rhodes’ wife visits him at his office to warn him (btw- she risked violating confidentiality) that Axelrod is shorting the stock and to get out of the stock ASAP, Chuck treated her like the enemy and spoke to her with such condescension and disdain that he left her head spinning. Where the hell did that come from?

Verdict so far:  Even though Rhodes fights for the underdog, does he do it for justice because it’s the right thing to do or does he do it to win, to gain in his position?  Since Rhodes masterminded this whole sting (he lied), knowing and not warning anyone close to him such as his father and friend about not investing their life savings, and using his wife for information to fulfill his own needs and desires without thought of the devastation to the one’s closest to him or his marriage, I’d say this is calculated and reckless behavior.  So, I’d say he’s pretty high on the narcissism/sociopath/machiavellian scale.

Sociopathy and narcissism are fluid and progressive depending on circumstances and environment, they’re not born, they’re made.  Power and money are great aphrodisiacs and will bloat the ego exponentially.  Are these two characters simply blinded by pride, revenge, and winning?  The writers do a great job with walking that fine line and they do an even better job with no clear answers of who the  ‘good guy’ vs ‘bad guy’ really is.