Ask a true perfectionist if they think they’re a perfectionist and they will most likely say, ‘No, because I never get anything perfect.”  That’s the key for a perfectionist, they feel like they fall short more often than not and rarely celebrate their accomplishments because they are off to the next goal or thinking about what could’ve, would’ve, should’ve been done differently. Being a perfectionist is work. It’s a daily grind of judgments and blame – of self and others. Perfection might look like ‘never’ making a mistake at work, constantly pleasing others, appearing that you have everything together, you may appear flawless to others. Perfectionism is about performance.

Other’s looking from the outside may be in awe, may want to be more like you. Because perfectionism looks so good on the outside, few people would think that Shame is what’s really underneath, the driving force of perfectionism. Shame is the feeling that you’re not good enough, unworthy of being loved and accepted as you are. There’s the pervasive subconscious thought, like white noise in the background, of ‘If they really knew me, knew where I came from, knew what’s really going on in my life they won’t accept/approve of me.”

Being a perfectionist or living with one isn’t easy by no means. Perfectionists are often hardest on themselves, the harsh criticisms of self never let up, with the constant self-judging as well as judging others.  Perfectionism is learned, meaning at some point in a person’s life, it was expected of them to perform and perform well; perform well in school, perform well outside of the house, get good grades, and excel in sports.  Rule of thumb is to perform well in All areas of life, and look good while you’re doing it.

Because of this constant self judgement of ‘not being good enough,’ perfectionists don’t realize how self-righteous and angry they can be. Perfectionism leads to procrastination, which leads to judgments and self blame, which leads to anger and guilt, which leads to anxiety/depression.  Those emotions have to come out somewhere.  The perfectionist is exhausted and depleted from trying so hard to be perfect, they lash out at the closest one’s. Perfectionism is basically a sticky web of expectations, self judgement and self blame.  You want to break through but shit keeps getting stuck to you. I haven’t yet met a perfectionist that didn’t want that mask to come down. They truly really want to be known and loved as they are, without performing. 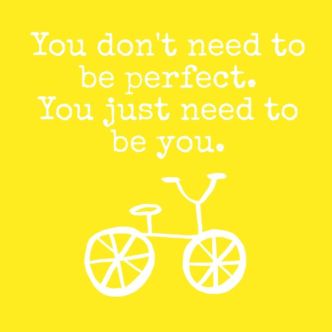 However, here’s where perfectionism kills the spirit: the fastidiousness of twisting yourself into a pretzel to put on a certain face,  keep up appearances, consistently attempting to control the outcome – of everything, and playing the part even though you feel like a fraud inside because nothing you do is ‘really ever good enough.’ To the true perfectionist, making a mistake means you have failed in some way, that you are less than. So to combat that feeling of never making a mistake, never feeling less than, you don’t risk. You don’t risk being vulnerable, showing yourself as you really are, human, messy and imperfect. Instead, you stay where you are, doing the same thing even though what you really want to do is to Be Free. To Be You.  As you are, without performing.

If you are dealing with perfectionism, and want some breathing space, meaning you are tired, exhausted, frustrated and may want to claw out your own eyes, then try this……

For the perfectionist that you know: Give them a bear hug, look him/her in the eyes and tell them that you love them just as they are. And repeat if needed.

You are the perfectionist: Self-compassion. Self compassion is loving yourself and forgiving yourself despite what you do or what you think about yourself. If you find yourself being critical or judgmental of Self or others, immediately say to yourself, “I forgive myself” and “I love myself.” Every. Time. Start with that. It’s work. Be diligent.